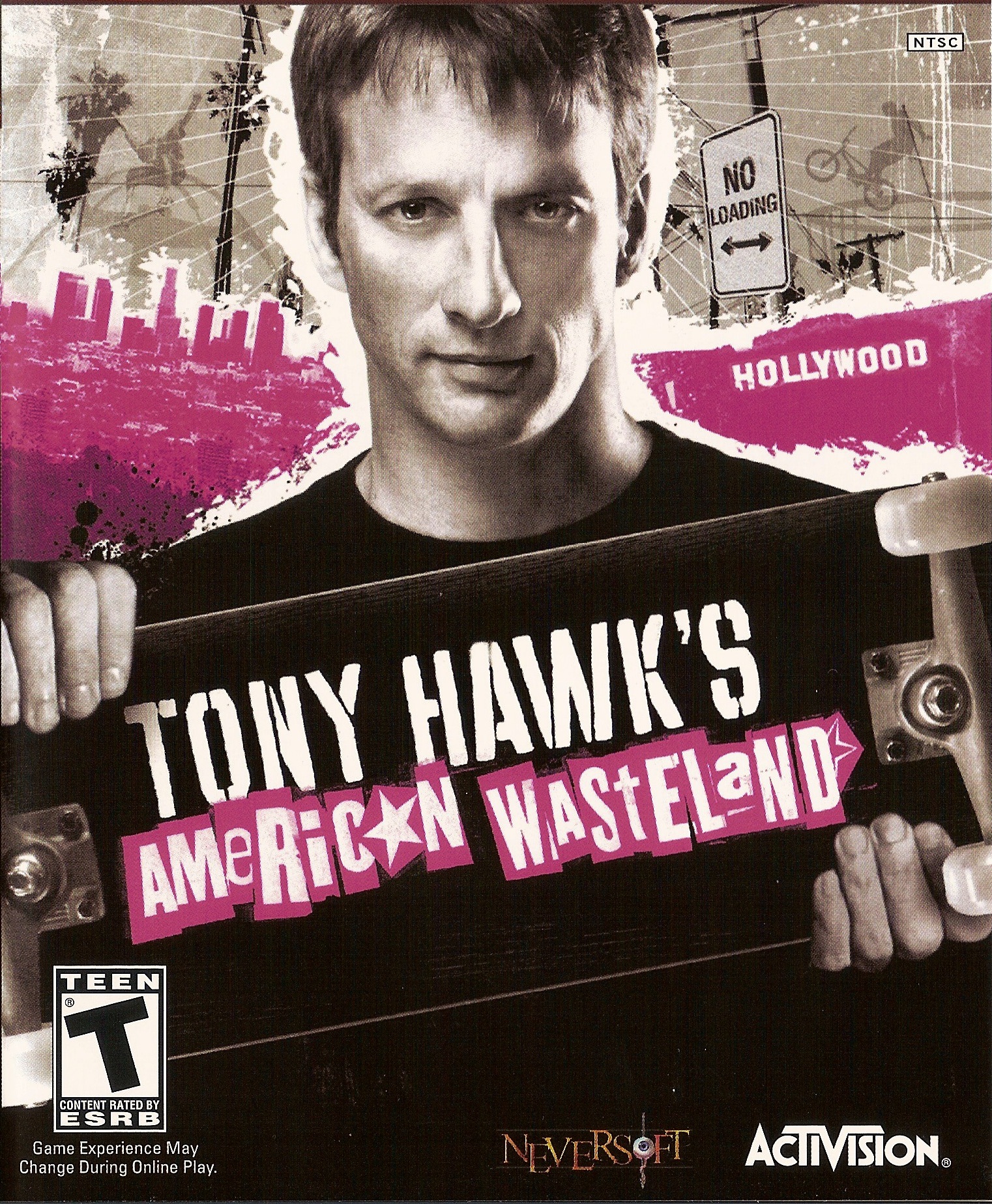 Tony Hawk’s American Wasteland is not a good game.

Released in 2005 for the PlayStation 2, Xbox, Xbox 360, Gamecube, PC, and handheld platforms (as ‘American Sk8land‘), Tony Hawk’s American Wasteland (THAW) is noteworthy for being my least favorite in the entire series… pre-RIDE, of course.

One thing that always stayed consistent with the Hawk series was the overarching tone. Sure, things got a little silly with Pro Skater 4, and maybe Underground 2 tried a little too hard to appeal to the ‘Jackass’ and ‘Viva La Bam’ audience, but there was a level of consistency there, and they knew who they were trying to market to.

THAW throws that completely out the window with its almost embarrassing attempt to appeal to the ‘tweeny hot topic “look at me, I can be punk too”‘ audience. Everything, from the generic ‘PUNX’ characters, to the pathetic level of difficulty, to the soundtrack, it all feels like it was made by a completely different team. But you know something? It sort of was.

You see, THAW wasn’t the only Neversoft game released in 2005. They also put out the criminally underrated western shooter GUN (second only to the Call of Juarez series as my favorite western game) about a month after THAW. It’s worth noting that GUN was made by the experienced higher-ups at Neversoft, and THAW was done by the rookies. A fun fact, both GUN and THAW were also launch titles for the Xbox 360, and cost ten dollars more than the last-gen versions for no reason. These games were made as a case for ‘should being next-gen mean a higher price tag’ with a big fat ‘NO’.

But we got a Hawk game made by the B-team. What was so bad about it, you might ask? The back of the game itself almost gives us a checklist. 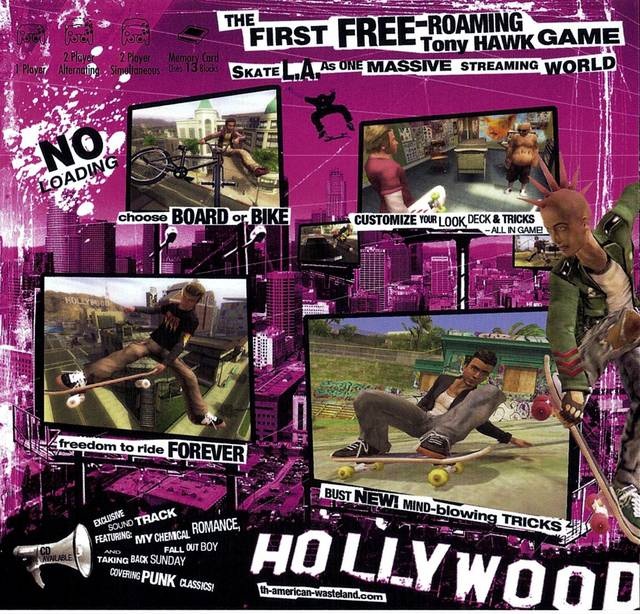 No loading? They did the absolute bare minimum here. If you aren’t familiar with the game’s notorious “load tunnels,” allow me to elaborate. Each level is connected via a large open world, that much is true, but between each area, you have to go through an area that masks the loading of the area coming up. In terms of time, it’s hardly different, if at ALL, than simply loading a different level from a menu. Though flawed, the idea of an open world Hawk game was still an impressive feat on the aging PS2 and Gamecube systems, but it was embarrassing on the (at the time) cutting edge Xbox 360.

New tricks? Yes, if you want to count a lot of useless content that was cut for next year’s Project 8. Aside from the ‘just enough so we weren’t lying on the back of the box’ promise of its ‘open world,’ THAW brought very little to the table. Pointless parkour moves that you’ll probably forget you have, a slide that was more about style than practicality, horribly shoehorned in (though not forced) BMX mechanics, and probably the only useful thing they added, the rail stall: a move that allowed you remain stationary on a rail and change direction with ease. There were other things too, but they hardly came into play (the ‘board whack,’ for one) that they aren’t even worth mentioning. 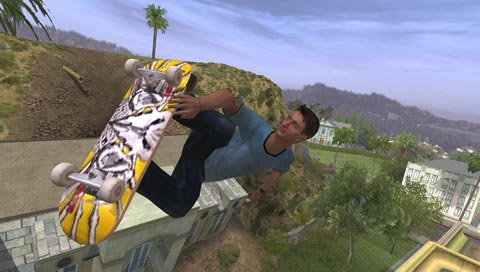 Classic mode returned from Underground 2, though it was crippled by comparison. THUG2 brought over a dozen levels, comprised of both retooled levels from that game AND older installments, but THAW only had a total of six. And the level choices they made were pretty laughable. Chicago? Mall? Not one but TWO levels from the PSP port of THUG2? They may have phoned it in, but they get props for including one of the bonus levels in the THUG2 port as part of the main story, and ditto for including the Xbox exclusive “Oil Rig” level from THPS3 as well.

But it was the soundtrack where THAW took a dive. They always knew what they were doing with the music in the past, but having a different team trying to appeal to a ‘broader audience’ didn’t help. If you like old school punk like The Misfits, Suicidal Tendencies, The Dead Boys, or Fear, prepare to be disappointed, as they DO make the cut here, but they have the unfortunate distinction of being covered by today’s more ‘popular artists.’ I’d love to punch the man that thought having My Chemical Romance cover “Astro Zombies” was a good idea. It was he other artists they had, like Bad Religion, Dead Kennedys, Mötley Crüe, Del the Funky Homosapien, and The Doors the helped round out what would otherwise be a lousy soundtrack. I wouldn’t even call THAW the worst soundtrack in the series, but it’s near the top. Or bottom, depending on how you look at it.

But hey, it had that song about dirt. Remember “I Like Dirt?” I bet you do. In fact, some of the covers they had were dynamite.

It may seem that I’m giving THAW a full-blown thrashing, but I could easily call this a 6 or 7/10 game and be done with it. It’s because it’s noticeably inferior to its predecessors that many of its flaws stand out. THAW also happens to be a very, VERY ‘love it or hate it’ sort of game. In a way, it did succeed at bringing in that new audience, but unfortunately, they did so at the cost of alienating much of their existing fanbase, with the new tone, dumbed down difficulty, lack of polish, and other issues.

I personally know many people who loved this game, and I had my moments of fun with it. The story may have been on par with THUG2 in terms of stupidity, but there was a charm to it. The low difficulty was an annoyance, though not a hindrance. There may have been a few more noticeable glitches (specifically pedestrians stuck with their arms out in a “T” position), but nothing game-breaking. It was a ‘meh’ game in an otherwise fantastic series. We all make mistakes, right?

Well, 2006’s Tony Hawk’s Project 8 tried to come back to reality and bring a high difficulty back with it, but it stumbled. It was also the point where many started to wonder if the inevitable decline of the series was happening. That’s next week.