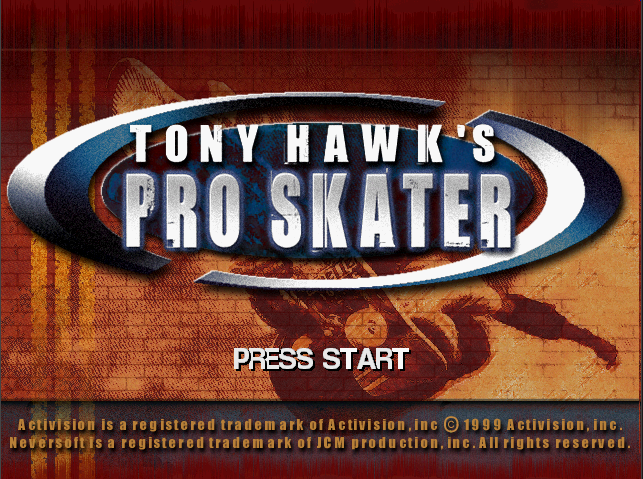 Can you believe it’s been fifteen years since the original Tony Hawk’s Pro Skater was released?

Tony Hawk’s Pro Skater (also called Tony Hawk’s Skateboarding in Australia and Europe) was released in 1999 for the PlayStation, Nintendo 64, and Game Boy Color, with a Dreamcast port following sometime after. It was unique, because at the time, there was nothing like it. There weren’t even that many skateboarding video games out there. Other then Skate or Die, I couldn’t name a single one, and I don’t even know how I remembered that. I had to Google for other titles.

This was one of the biggest strengths for the Tony Hawk series of games right out of the gate, and it held true for almost a decade; it was alone in an uncontested genre. The same could be said for at the time rookie developer Neversoft, who at the time, didn’t have a ton of credits to their name. A port of PC shooter MDK to the PlayStation and a third person action game starring action movie star Bruce Willis were the only credits they had.

I’ll be the first to say that it’s really difficult to talk about the earlier games in a series, especially when said series has had so many installments and improvements to the formula, and THPS is no exception. This game’s mechanics, though still functional, don’t age particularly well. It’s very reason that, unless you specifically grew up with the original (as I did not), it tends to get ‘glossed over’ by the later installments.

The nine levels in the original THPS had their own charm, albeit simplistic compared to the later installments. In fact, many of them showed up in later games as well. The iconic starting ‘Warehouse’ stage actually showed up as the ‘Training’ stage as part of the story mode in Tony Hawk’s Underground 2 (the ‘school’ stage made an appearance as well). In addition, the ‘Roswell’ and ‘Burnside’ levels reappeared in Tony Hawk’s Pro Skater 3, and the ‘Mall,’ ‘Downtown,’ and ‘Chicago’ stages reappeared in Tony Hawk’s American Wasteland. All of the characters, the majority of them actual pro skaters, would go on to appear in more games in the franchise, with most of ‘the original cast’ as we’ll refer to them appearing in everything up to and including Tony Hawk’s Underground.

And a bonus fact. Did you know that ‘Downhill Jam,’ which is considered by many to be one of the worst levels in the history of the series, is actually the personal favorite of Tony Hawk himself? And that he himself chose it to be included in both Tony Hawk’s Underground 2 AND Tony Hawk’s Pro Skater HD? Now, if it showed up in Tony Hawk’s Downhill Jam, it would have come full circle.

Also, how have I gone this long without mentioning the soundtrack? The Hawk games always had a nice balance of punk, rock, and hip-hop tracks, and even though the soundtracks got bigger, the quality never suffered. Tony Hawk’s Pro Skater had bands like Primus and the Dead Kennedys on the soundtrack, but perhaps most importantly, it also holds the distinction of containing what is considered to be the ‘Tony Hawk anthem:’ Goldfinger’s ‘Superman.’

As I stated earlier, it’s very tough to talk about an older installment when the franchise has moved so far. It’s clunky, there’s no manuals, reverts, transfers, or create-a-modes. But for the time, it was simple and fun; all you could really ask for from a game. It laid the foundation for gameplay that held the franchise for almost a decade afterwards.

Come back next week when I talk about one of the most improved sequels to anything: Tony Hawk’s Pro Skater 2.