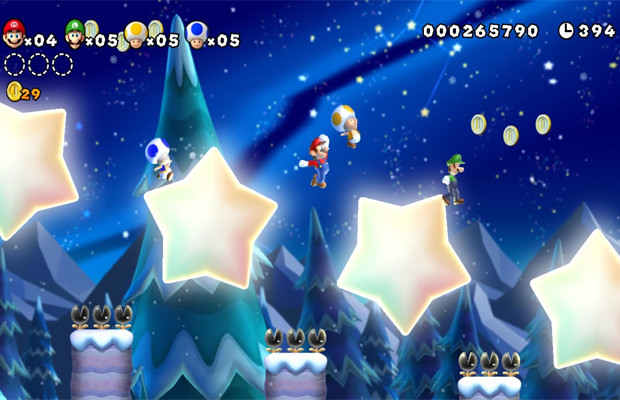 ‘New Super Mario Bros. U’ getting a patch for Wii U Pro Controller support in Japan

Nintendo’s New Super Mario Bros. U will be supported with future DLC in the form of Super Luigi U but the original game will be patched upon release. It will include a couple new features, particularly one for alternate controllers. On a Miiverse post in Japan, the details revealed that the patch will include Wii […]Read More

The first round of Wii U reviews hit the public

Popular UK magazine GamesMaster has reviewed Nintendo Land and New Super Mario Bros. U, both being launch titles for Nintendo’s new home console that’s slated to release on November 30th in that region. In the publication’s latest issue Nintendo Land received an 86%, citing “a heck of a lot more to it” supposedly than what the game may seem. […]Read More

Nintendo has confirmed that New Super Mario Bros. U, one of the Wii U’s most hotly anticipated titles, will run in full, glori0us 1080p. “Experience Mario like never before… in full 1080p HD, only on the Wii U console!” the game’s official site reads. The platformer has only been shown in 720p at recent events, […]Read More

Boxart for ‘New Super Mario Bros. U’ shows off many Yoshis

What were you expecting on this boxart? Super Mario World? To be fair, Mario is on a Yoshi with no cape. But that’s not the point but it looks pretty colorful. One of the Wii U’s boxart does look familar to you GameCube lovers out there. We got the Yoshi’s of all different sizes from […]Read More