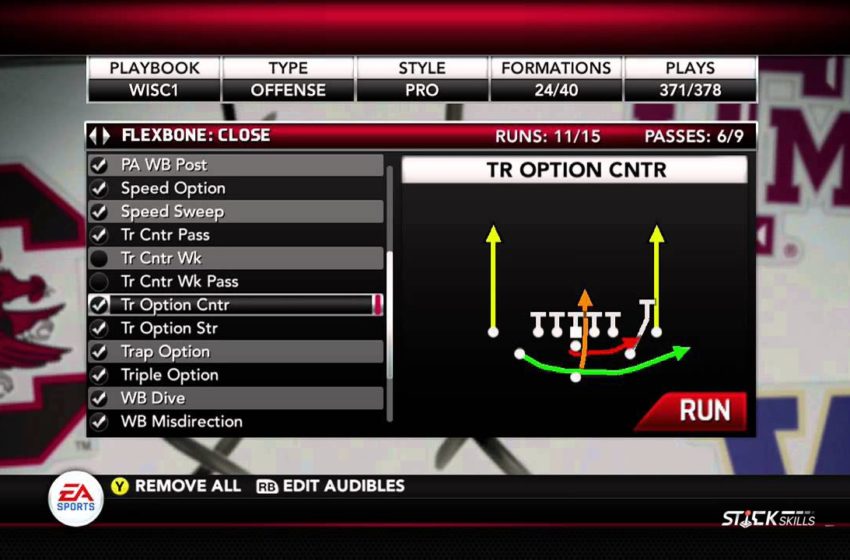 One of the countless reasons that fans love NCAA Football 14 is it has some of the most unique formations and plays in any football video game.

Fans of the Madden know just how stale a lack of formation and play diversity can make a game. 1 month after the game is released you see the same 3-5 plays in 90% of online matches.

To be sure, it was a different time when websites like YouTube weren’t as popular as they are now. Even in a perfectly made game, a meta strategy will emerge eventually but the NCAA Football franchise had so many viable formations, every game you played was bound to be different.

Today, we are taking a look at 10 of our favorite formations in NCAA Football 14 that we want to see in the new EA Sports College Football video game.

The Shotgun Heavy formation was truly a fan favorite! It was perfect for a team with a power running quarterback like Tim Tebow or Cam Newton in short yardage situations.

It was a tough formation to defend just because you could sub in running backs at the fullback spots to get extra speed on the field and you still have the 1 wide receiver out wide to keep the defense guessing.

Shotgun Heavy is exactly the type of formation that made old NCAA Football games special. Sure, it wasn’t something you’d see too often on Saturdays but it was really fun to use in the game.

NCAA Football 14 had tons of Wildcat formations that could really confuse the defense. Take a look at where the personnel in this formation are lined up.

The starting left tackle is lined up on the line of scrimmage at a receiver spot on the right, a wide receiver is inside of him, and the tight end fills the left tackle’s spot on the offensive line.

Was this a super effective formation? No, but it was really fun to throw in as a wrinkle from time to time.

The Wishbone formations were really fun if you had the personnel to run it effectively.

You could run all kinds of triple options, speed options, rollout passes and much more from the Wishbone Tight formation.

It was even more effective as you got closer to the goal line.

Before EA Sports brought back a 6 play Split Back formation in Madden 20, it had been 6 years since we’ve seen the Split Back offense in a major football video game.

In NCAA Football 14, you have a couple different Split Back formations with enough plays in them to actually run a viable scheme.

Shotgun Empty Quads is another really fun and unique formation that needs to be in the new EA Sports College Football game.

With 4 eligible receivers to one side of the field, this formation puts a lot of stress on the defense.

If you had a mobile quarterback, it made it even tougher because if the threat of calling a play like QB Blast and running it right up the middle.

The Maryland I was a fan favorite in NCAA 14 and needs to be brought back in EA Sports College Football.

You line up and you commit to pounding the ball down the defense’s throat.

We’ve all became used to the very limited goal line formations in Madden games and while NCAA Football games didn’t have a ton of variety, they did have some.

The Goal Line Offense Twins Over formation, Shotgun Heavy, and the Maryland I all gave you some different looks you could give the defense inside the 10 yard line.

If you play Madden you know once your opponent gets inside the 10 yard line there are maybe 2 formations and 4 run plays that are ever called.

Very few football teams these days run the generic goal line formation in Madden outside of maybe if they are 1 yard away from the end zone. It will be good to have some real options again.

The are lots of cool Pistol formations in NCAA Football 14 and hopefully those make their way into the new game as well.

The Pistol Wing Trips formation was one of the more unique ones.

A formation like Wingbone Twins Over may not be all that common anymore but the plays you could make out of this formation were special.

You could run to the left, to the right, up the middle, or rollout to the right. Hopefully at least a few different Wingbone sets make it into the new game.

Next up is Shotgun Split Big. It is another unique formation that hasn’t been in a major football video game since NCAA Football 14.

You have 2 half backs in the backfield with a running quarterback and 2 tight ends. You could easily audible down to Shotgun Heavy if you wanted more of a power run look.

This is just a small sampling of the cool formations that were in the last college football video game. It is very important that EA Sports has diverse playbooks with all kinds of different plays and formation in the next college football game which is set to be released in July 2023.

What was your favorite offensive formation in NCAA Football 14? Let us know in the comments!