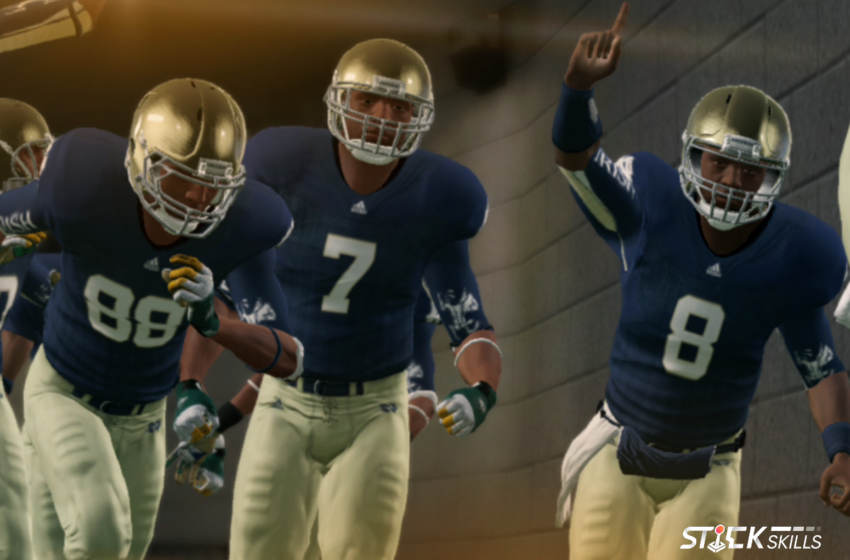 Last week Notre Dame announced that they will be opting out of the upcoming EA Sports College Football game. They were the first school to officially opt out and have since been followed by Northwestern and Tulane.

As a refresher, here was the official statement from Notre Dame regarding inclusion in the next EA Sports College Football video game:

Notre Dame Athletics welcomes the return of EA Sports College Football, a video game series that has historically promoted interest in college football. Notre Dame will not, however, participate in a game until such time as rules have been finalized governing the participation of our student athletes.

As those rules are developed, it is our strong desire that student athletes be allowed to benefit directly from allowing their name, image, and performance history to be used in the game.

From the above statement, it seems like Notre Dame is unabashedly on the side of their student-athletes. There is definitely more to the story than that though.

As we continue through this article, it is worth keeping in mind that the University of Notre Dame has every right to license (or withhold) their name, logo, stadium, and other assets to whatever companies they see fit for whatever reasons they want.

Let’s start with a little background. The new EA Sports College Football video game will not use any current NCAA player’s name, image, or performance history and the absolute earliest it could be released is in July 2022.

In the old NCAA Football games (before the game was cancelled), EA Sports didn’t technically use olayers’ names but everyone knew who the 99 overall 6’3″ 255 pound QB #15 on the Florida Gators was.

They used Tim Tebow’s height, weight, number, hometown and even the fact that he was left handed in the game. If you were a fan of college football or a particular team, you knew who each player was supposed to be even if they didn’t come out and say his name.

This is what got EA into trouble and in the new game they have already pledged to use none of that stuff. No names, images, or likenesses of college athletes will be in this game.

So it seems a little off that the University of Notre Dame is trying make it look like they are taking a principled stand against companies using their players’ names, images, and likenesses.

You know who is blatantly profiting off student athletes’ name, image, or likeness? Most major universities including Notre Dame.

A quick 15 minute Google search turns up all tons of links and images shows all kinds of crazy things. Let’s take a look at just a handful of them.

Let’s take, for example, Notre Dame’s quarterback #12 Ian Book. He is undoubtably one of their most nationably recognizable players. Indeed, he is Notre Dame’s all-time leader in wins as a starting QB. That’s pretty impressive stuff.

Now lets just go take a look over at, “The official online store of the Fighting Irish, a Fanatics experience.”

That sure looks like a lot of #12 football jerseys are being sold.

Now we should consider that Ian Book is a senior leaving for the NFL Draft this year so maybe selling his jersey could be a grey area. That argument is quickly debunked by a quick search on the Internet Wayback Machine showing a snapshot of the same website in August 2020 and October 2020 when Book was still undoubtedly a current NCAA student-athlete.

Next, let’s take a look at using a players’ number and likeness to sell tickets. Here are just a few recent examples.

Let’s take a look at UND.com/sports/football.

A lot of merchandise was probably sold using what very much looks like Notre Dame team captain Shaun Crawford.

Another senior, but again if we look at the Wayback Machine in the middle of the college football season, we see his image was being used to sell merchandise while he too was still a student athlete.

Let’s just look at a few other images of student athletes used to sell or promote a product.

The image above was used to promote the 2019 Camping World bowl game again using some of Notre Dame’s most recognizable players. The payout that the school received for participating in that bowl game was somewhere in the ballpark of $6 million.

This image was used in an email to sell season tickets in partnership with VividSeats.

It isn’t limited to just the football program. Even in smaller non-revenue programs at Notre Dame like Men’s Lacrosse the same practice is used.

Notre Dame promotes their 2020 Men’s Lacrosse schedule in this image where on the same page, there is a link to buy tickets.

Surely some of the usages of the images above can be explained away but taken as a whole, it shows the University of Notre Dame (or their corporate partners) using the names, images, likenesses or jerseys of student athletes to make money.

Anyone who has ever been to a major college football game sees posters of current players as they enter the stadium, or a player’s image on their ticket, or pictures of players (and often their performance histories too) sold in official gameday programs. The list goes on and on.

How many times have you turned on CBS, NBC, FOX, or ESPN during college football season and seen a commercial for a game later that day showing players posing for the camera’s, showing highlights of the previous week’s games, etc? It happens all the time on every major network. Where are the school’s standing up for players’ rights then?

Here’s a really cool hype video/commercial from NBC Sports getting fans ready for another season of Notre Dame Football on NBC.

In their most season, Notre Dame made $22 million from NBC and ACC TV revenue according to Rivals.

According to Sporting News in 2013 (the same year NCAA Football 14 was forced to shut down) Notre Dame football signed a a 10 year $150 million contract that would start in 2016 and run through 2025.

If you were paying attention to any of the images above, you could clearly see the Under Armour logo prominently displayed on the Notre Dame uniforms. In 2014 they signed a 10 year $90 million dollar contract according to ESPN.

You can see how directly or indirectly (depending on how you want to look at it) schools are benefitting from their players’ names, images, and likenesses.

To be fair, given the current NCAA rules, schools can’t compensate their student athletes. They could however use different gameay posters, pay former players instead or current players to be on tickets, use school imagery instead of players on the programs, structure their TV contracts differently, etc. But of course, all of this would lead to less revenue and more expenses.

It is much easier to take the low hanging fruit and appear on the side of the players. It’s a massive PR win to say things like, “student athletes should be allowed to benefit directly from allowing their name, image, and performance history to be used…”

Turning this back to EA Sports again, they don’t plan on using any current NCAA players’ names, images, likenesses, or performance history. EA will use “the logos, stadiums, uniforms, gameday traditions” of the schools. Generally, none of those are things that NCAA players would have any claim to.

Back in 2013, EA made the heartbreaking announcement that they will not be making NCAA Football games for the foreseeable future.

Just like companies that broadcast college games and those that provide equipment and apparel, we follow rules that are set by the NCAA.

Their argument was basically, “How is our use any different from braodcasters, or apparel companies?” Remember, back in 2013 they weren’t using names but they were using likenesses and performance histories.

In EA Sports College Football 23, there won’t be names, likenesses, or performance histories for any current player. Obviously fans don’t want a game with random players. Not including those players in the game will hurt EA’s bottom line but EA is attempting to be fair to the players.

Notre Dame selling a generic #99 football jersey in their official store (A Fanatics Experience) surely wouldn’t sell as well as, say, star quarterback Ian Book’s #12 jersey. They seem more than happy to profit off of their student-athletes when no one is looking.

Indeed, all of this talk about Notre Dame taking a principled stand on the side of the players is silly. On a recent episode of the Paul Finebaum show, Notre Dame AD Jack Swarbrick mentioned he is confident it will all be sorted out by next season anyway.

Student athletes deserve to have the same rights as other students on campus…At the end of all this we’ll get to some resolution and student athletes will have name, image, likeness rights, and I’m confident they will have them going into next season.

It is a rare position any gaming journalist finds themselves in defending Electronic Arts, but in this case they seem to be doing everything by the book and are being unnecessarily thrown under the bus so that Universities can keep the veneer of being on the side of the players.

Expect Notre Dame to be in the next EA Sports College Football game. They got the PR win for looking like they are on the side of their players, and they’ll get the big payday from EA Sports when the the dust is all settled.

This is so messed up!

LOL bro they got Ian Book jerseys selling in their online store!

U know that Ian book made all that money right and if you were a player wouldn’t you like to make so money for people using your name.