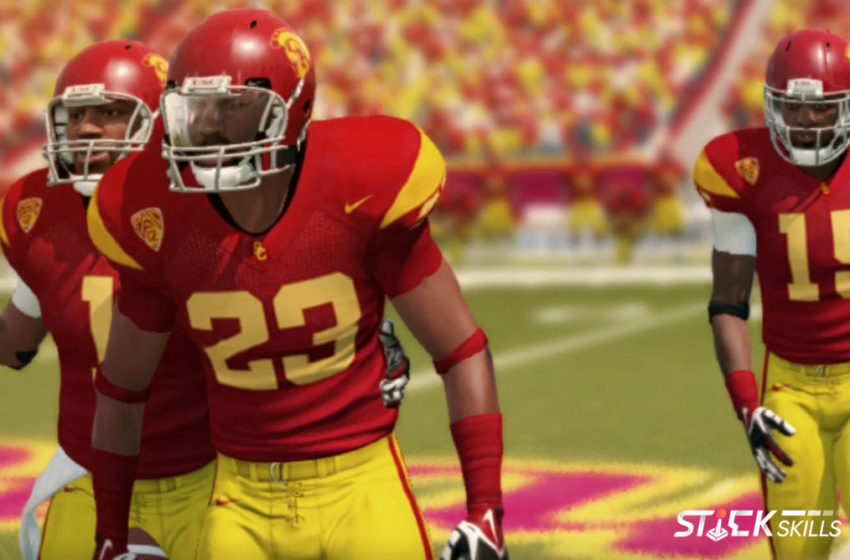 Unless you have been living under a rock for the last month, by now you know that EA Sports is bringing back one of the most beloved sports video game franchises of all time: NCAA Football. They were able to work around their previous restrictions by striking a multi-year licensing deal with the Collegiate Licensing Company (CLC).

EA Sports will no longer be able to use the NCAA name anymore so they decided to rebrand the game going forward with a new name: EA Sports College Football.

The release date is still unclear but it is assumed to be either July 2022 or July 2023. It will be available on both the XBOX Series X|S and PlayStation 5 consoles.

Through the CLC partnership, the franchise will include the rights to more than 100 institutions featuring the logos, stadiums, uniforms, gameday traditions and more that fans have come to know and love. While this college game will not include student-athlete names, images and likenesses, EA SPORTS is continuing to watch those developments closely.

We know that the game won’t include names, likenesses, or images of current student athletes but in the grand scheme of things that is only a mild inconvenience for people planning to buy the game.

Most gamers will purchase the game for 1 of 2 reasons.

They want too play a long dynasty mode either online or offline with their favorite college teams quickly progressing past the first few years. After the first 4 seasons of a dynasty, there will be no difference whatsoever.

Or they prefer to play Ultimate Team with historic players who are either in the NFL or retired (think Tim Tebow and Percy Harvin for Florida Gators fans).

Neither one of these scenarios are greatly affected by the restriction on current NCAA Football player likenesses. The much more important ingredient is to use the teams’ logos, uniforms, stadiums, etc.

And for the most part, those will all be in the game. We did the leg work to track down every college that is or isn’t in the game as of now. These things can and likely will change before the official release date but here is where things stand today.

The colleges’ below are listed in alphabetical order. All of these teams are part of the CLC agreement and pulled directly from the CLC website.

Teams That May Not Be In EA Sports College Football

The 12 colleges below are not part of the agreement. They could still make their way into the EA Sports College Football game, but a separate agreement would need to be made.

Those teams can be found below.

It is worth noting that Clemson and USC are not covered by the CLC. They have an existing relationship with EA Sports through Madden 21’s Face of the Franchise mode. Madden 21 features those colleges’ name, logos, and uniforms in it.

It is probably a pretty safe bet that USC will be in the new college football video game if for no other reason but to show up one of the rivals: Notre Dame.

Notre Dame is the 1 notable program pledging to not be in the game. Whether the rest of the teams not covered by the CLC agreement follow Notre Dame’s lead or USC’s lead remains to be seen.

There are both very important teams since both USC and Notre Dame had the highest program prestige rating possible (6 stars) in the last NCAA Football 14 game.

It will also be interesting to see if the United States Military academies like Army, Navy, and Air Force allow their teams to be included.

Another big concern that many fans have is which conferences will be in the new game. As most college football fans know, the FBS has 10 conferences.

You have the power 5 conferences.

And then you have the group of 5 conferences.

The Mid American Conference is also represented by JMI Sports in a 10 year deal that runs through the 2030 academic year.

The Big Ten is the only Power 5 conference that is a bit unclear. If EA Sports can reach an agreement with the Big Ten, that would eliminate one of the big hurdles to making the game as authentic as possible.

The CLC agreement also covers a ton of bowl games and other important properties.

Here are some of the notable properties you will see in the new game:

There still remains a lot to be determined. Some teams could join the CLC, some could drop out, and some could make their own agreements but this is where we stand as of now.

Leave any questions you have about the new EA Sports College Football video game in the comments!

Corrections: Article was updated to reflect new information regarding new conference deals with JMI Sports as well as Clemson, Pittsburgh, and Arizona State no longer being covered by the CLC.

Now check out our deep dive into the teams not currently in EA Sports College Football.

The Big 10 conference better be in this game!

It does have Maryland and all the Big 10 teams dude. Read

What about the mountain west conference?

Good question. The article was updated to reflect that the Mountain West recently signed a 12 year deal with JMI Sports so they are not currently covered by the CLC agreement.

So what will EA do with the teams that are in the Mountain West in the game?? Will they distribute those teams to other conferences, form a new conference just for the game, or make them all independents?

That’s an excellent question. I’m sure there will have a few good options

Has Arizona State signed with EA yet?

Northwestern has now opted out of the new game

And now Tulane too https://stickskills.com/2021/02/26/tulane-is-the-latest-school-to-opt-out-of-ea-sports-college-football/

will liberty university be in the game?

yo wil JSU (Jacksonville state) be in the game

I sure hope nobody who works on Madden works on this game. Madden in consistently bad.