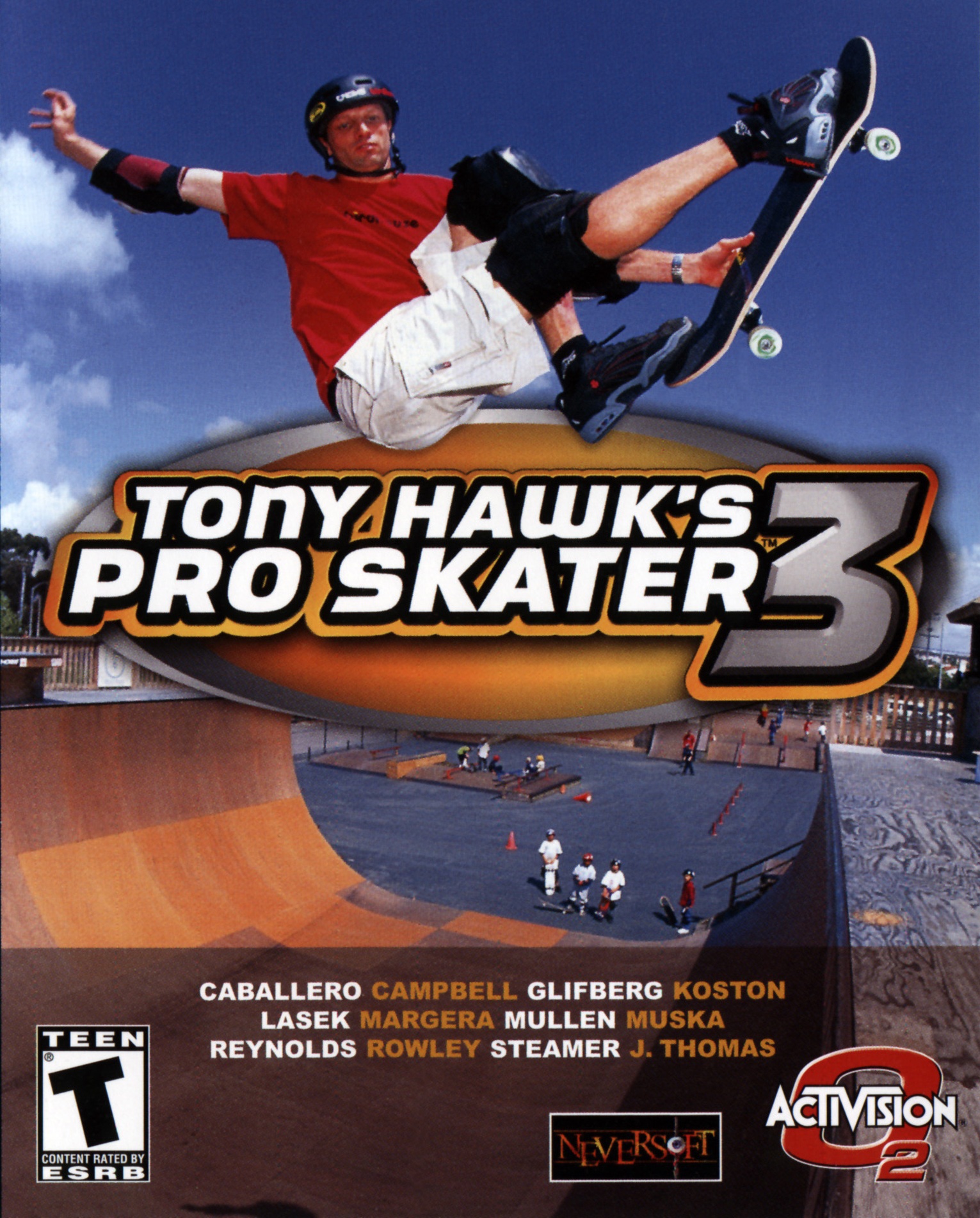 Released in 2001 for the Playstation 2, Xbox, Gamecube, PC, Game Boy Advance, PC, Playstation 1, and Nintendo 64, Tony Hawk’s Pro Skater 3 had quite a few credits going for it right out of the gate: it was a launch title for the then-brand new Xbox and Gamecube consoles, it had online functionality on the Playstation 2 before the online adapter was even commercially available, it was the last Nintendo 64 game ever made…

…and perhaps most important of all, it was the first Tony Hawk game I ever played. 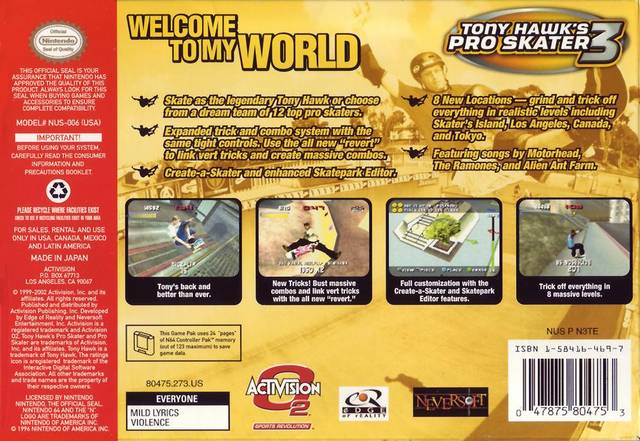 Forgive me if I’m being slightly biased. It may have to do with that aforementioned fact that this was the first Tony Hawk game I ever played, but I still hold to this day that, while it may not be my personal favorite installment, I have no problem saying that Tony Hawk’s Pro Skater 3 is the best Tony Hawk game in the entire series. 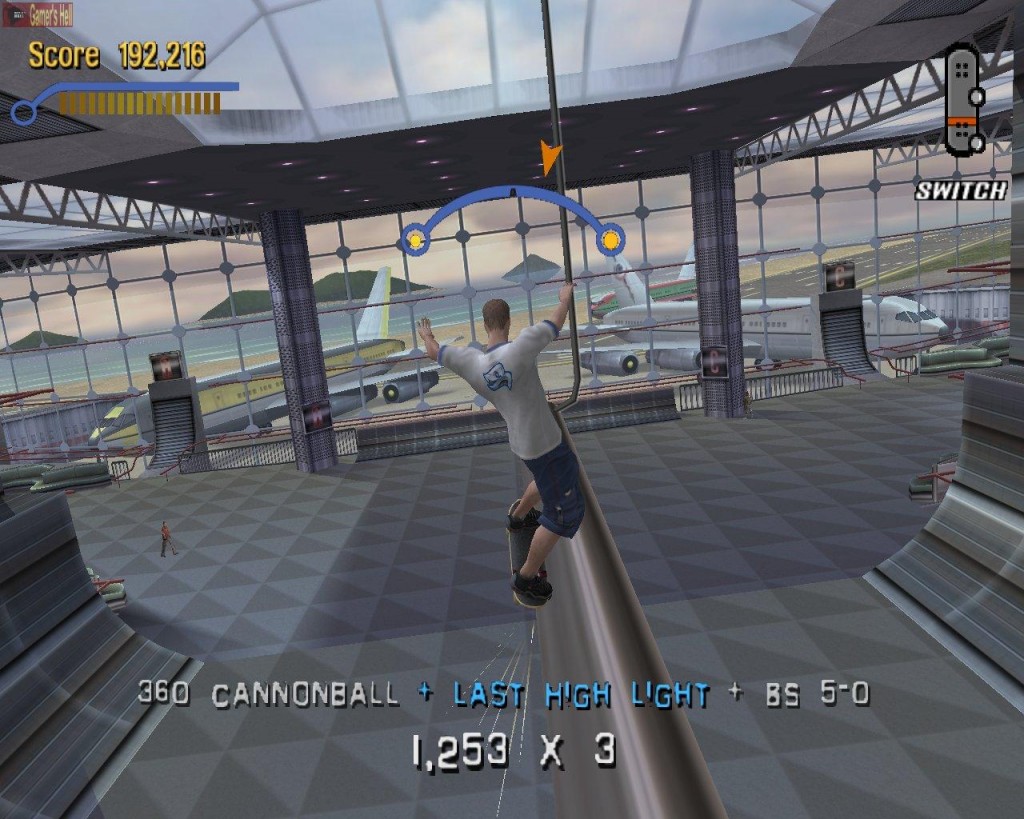 THPS3 may not have added as much as THPS2 content wise, but it took what was there and made it so much better. Levels were larger, and the graphics and gameplay were more fluid.

It also added one of the most important tricks in the series history: the ‘revert’. This move allowed you to spin in after landing in a quarter-pipe to keep your combo going. Factor this in with the manual introduced in THPS2 and combos got crazy. It also allowed you to perform variants with multiple button presses: you could do a double kickflip by double-tapping the kickflip button, for example. A balance bar was also added for grinds, to gauge how close you’d be to falling or not. Everything just felt tight.

The levels themselves were also larger then ever before, and had more of a degree of interactivity. Whether you were burying bullies in snow in ‘Canada’, starting an earthquake in ‘Los Angeles’, or exploring a haunted house in ‘Suburbia’, the levels themselves just had so much to do. I feel that the ‘Foundry’ level, the first level in the game, never got the recognition that THPS1’s ‘Warehouse’, THPS2’s ‘Hangar’, or even THPS4’s ‘College’ got. It’s just a personal favorite of mine, I guess. 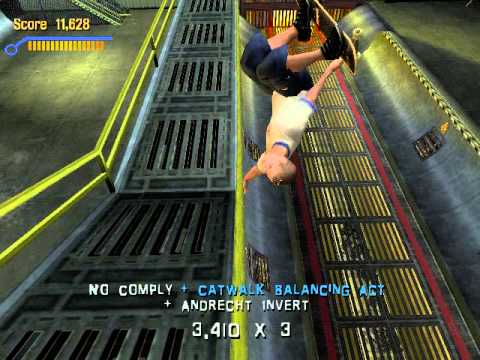 They also upped the anti for secret characters. You thought seeing Spider-Man on a skateboard was weird? How about Wolverine, Darth Maul, or professional surfer Kelly Slater? They had the returning cast from THPS2 (save for Bob Burnquist whom I can’t remember why. Licensing for another game, I think.) as well as THPS2’s ‘create-a-skater’ mode, but they certainly one-upped themselves on unlockable characters.

Even the protagonist from Doom made an appearance in the PC version, with appropriately laughable air stats.

Then there’s the soundtrack. It was full of heavy hitters: The Ramones, The Red Hot Chili Peppers, CKY, Motorhead, and Alien Ant Farm, just to name a few. It had Del the Funky Homosapien’s “If You Must,” which was quite possibly the best song ever about smelly people. There was The Adolescents’ “Amoeba” where everyone thought they were saying “TONY HAWK” constantly in the lyrics.

And perhaps most imporantly of all, it had the first song I ever heard in a Tony Hawk game, and my favorite song across the entire series: Bodyjar’s “Not the Same.”

Tony Hawk’s Pro Skater 3. It was wonderful, wasn’t it? It’s not hard to argue that any of the Hawk games from THPS2 all the way up to Tony Hawk’s Underground were the best. But it’s this one that many people will say was the peak.  Not to say that the quality didn’t decline afterwards… though it did eventually, but we’ll get there in time.

Next week, it’s Tony Hawk’s Pro Skater 4. The game that, until about two years ago, was the one in the series I had the least playtime with. And boy was I glad I put in the time.