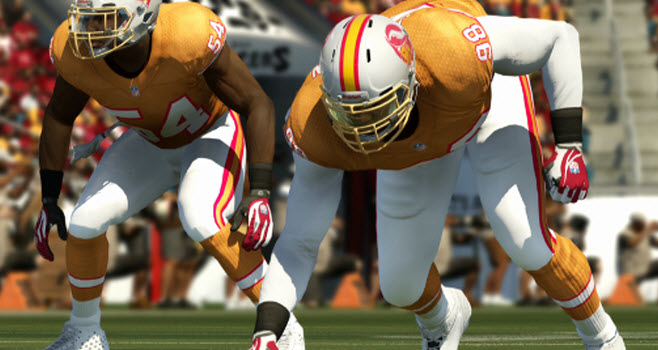 NFL free agency started on Tuesday and there have already been some signings that will have a huge impact on Madden 15.  Let’s go over the most impressive signings so far strictly as it relates to Madden NFL 15.

9. CB Alterraun Verner – Tampa Bay Buccaneers: A pro-bowl cornerback with a good catch rating.  The only thing Verner is lacking is an elite speed rating but he will still make a huge impact in Madden 15.

7. DE Michael Johnson – Tampa Bay Buccaneers: Much like in the NFL, good pass rushers are incredibly important when it comes to Madden games.  Michael Johnson adds another dimension to what looks to be an improving Bucs defense.

6. CB Vontae Davis – Indianapolis Colts: Vontae Davis resigned with the Colts but it is still a huge signing. He’s been an awesome cover cornerback in the last few Madden games.

5. CB Aquib Talib – Denver Broncos: Notice a trend starting yet?  Cornerbacks are incredibly important when it comes to Madden and that will be no different in Madden 15.  The Broncos needed a defensive back and Talib is a very good one.

4. S Donte Whitner – Cleveland Browns: A hard hitting safety could single-handedly change the outcome of a game in Madden NFL 25 because of the overpowered hitstick.  If this holds up in Madden 15, Donte Whitner will be a huge addition to the Browns defense.

3. S Jairus Byrd – New Orleans Saints: Byrd was one of the highest rated safeties in Madden 25 and will enter Madden 15 with a similarly high rating.

2. DE Demarcus Ware – Denver Broncos: Demarcus Ware has been one of the most fearsome pass rushers in Madden over the last decade.  Even if he loses a few points in overall rating, he will maintain his elite size, speed, and strength ratings.

1. CB Darrelle Revis – New England Patriots: Revis may not have been at his absolute best the last year or 2, but once elite cornerbacks maintain their high ratings years after they start to fade.  Revis is still a top 3 Madden cornerback and should continue to be for a few years.