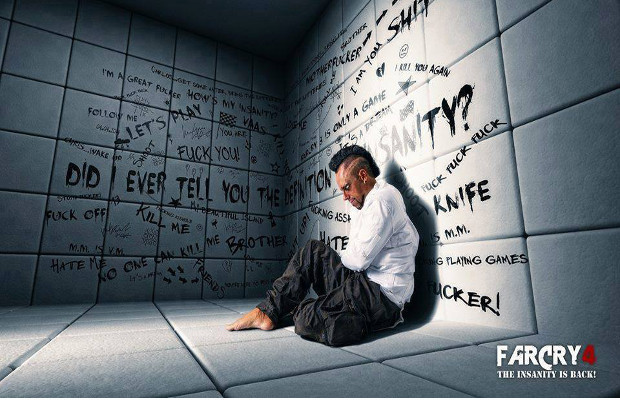 Far Cry 3 was a pretty great game with some impressive, risky, and successful changes made to the gameplay. With its insanity theme and survival elements, the game was one of the standouts of 2012. Please note, SPOILERS for Far Cry 3 follow.

A ways through last year’s game, protagonist Jason Brody finally slays the psychopath Vaas after hours of the villain causing headaches and bloodshed for the hero. Vaas was a wonderful character, a tropical island Joker. His death was a bit disappointing, if only because it meant his crazy monologues are at an end. However, a teaser image has surfaced for the next game, featuring…Vaas. The doomed antagonist is in a straightjacket and sitting in a padded room with plenty of writing on the wall. An eagle-eyed user over at Duuro noticed the date 4-4-14 on the wall as well (right below “Follow me” and to the left of “Let’s Play.”

Take this with a grain of salt, as always; Ubisoft has not made any mention of the image and we can’t find it on their website, so it’s not really clear where it came from. If it is fake, it’s a darn good one, and it could very well just be some awesome fan art that someone found and shopped a title into. For now, we’ll be content with the possibility that there will be a lot more Vaas in the future.