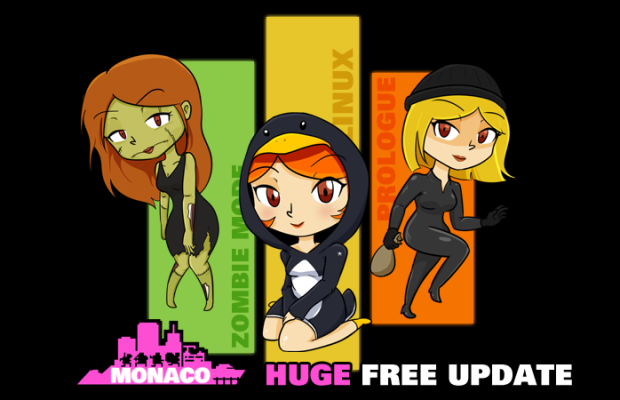 Monaco: What’s Yours Is Mine has so far been the standout indie game of the year, and for good reason. Everything, down to the simplicity of the control scheme, the insanity of 4-player co-op, and the charming visual style, struck a chord with me. That’s why I was very happy when Pocketwatch Games announced that the game would be getting a big update this month. Today, that update finally came out, along with the details of what the update itself entails.

Essentially, the update is 3 parts. The first is the zombie mode. With the flip of a switch, the game becomes Zonaco: Your Flesh Is Mine, bringing with it a washed out color palette and zombies (of the runner and Boomer varieties) replacing civies and guards. This actually changes more than you’d think, thanks to the the dumber AI patterns of the zombies and the explosive nature of the Boomer zombie. Next is a mini-campaign that covers what the cast of the game did before the events of the main game, with each level themed around one character in particular. These levels are especially challenging, thanks to their almost arena-like nature. Adding to the challenge are a few new gameplay features, such as guards carrying RPGs, doors that require keys, and NPCs that carry cash and keys with them. Along with all that is the addition of a new character called The Blonde. Finally, tying that all together, is Linux support for the game.

This is, frankly, a great update to an already amazing game. It’ll be interesting to see what the map makers on the Steam Workshop will do with these new toys. To commemorate the event, the game is currently on sale on Steam for 60% off. If for some reason 15 bucks was just too much for you, you really have no excuse passing it up at 6. However, you need to act quick, as the sale ends at 1PM EST tomorrow.

Tags: Monaco: What's Yours Is Mine Pocketwatch Games