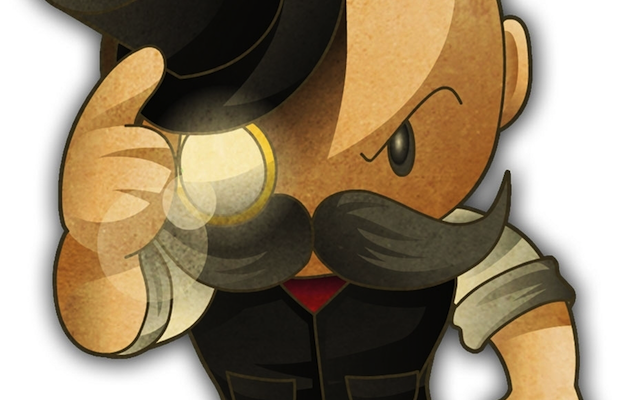 “All the world’s a stage,

And all the men and women are merely players”

As we grow older, entering our twilight days, it’s only natural to look back on our lives and take stock of where we’ve been and what we’ve done. How we do that may take on many forms. Perhaps we write our memoirs in a journal and keep it under our bed, or document them with photographs; maybe we sit in the dark and stare off into the distance, ashamed of the mistakes we’ve made.

Some people write books. Others write lengthy plays full of violence and spectacle.

Enter Mediatonic’s Foul Play, a beat-em-up that looks back on a long, productive life in the only way possible –  by adapting it for the stage.

Foul Play focuses on gentleman demonologist Baron Dashforth, a legendary monster hunter with a long, storied career under his belt. However, players don’t meet Dashforth until well after that career has reached its conclusion. You see, Foul Play centers around a one-night-only event – a play chronicling some of Dashforth’s most exciting adventures, written, directed and starring Dashforth himself.

That central conceit – all the world’s a stage, if you will – permeates just about every aspect of Foul Play. Each level, battlefield, and enemy is tied to that basic premise. Mummies and werewolves are, in fact, actors in costume, and the spooky catacombs and dusty deserts are actually sets that are wheeled in and out as you go. Each world is set-up as an act of that play, and the game is sprinkled with little gags pointing out the gimmick. For example, you’ll often see defeated enemies come to and wander off-stage or stumble upon a piece of tech in the middle of a smoke break. That the game’s visual aesthetic paints the entire affair with a gorgeous, cartoony brush makes those little touches all the more adorable (look at those giant werewolf heads! They’re so cute!).

This generation has seen a sort of resurgence in the old-school brawler genre, with games like Castle Crashers and Scott Pilgrim vs. The World acting as a revival of a classic genre made popular by Golden Axe and Streets of Rage (which have also come into greater prominence this generation thanks to the rise of digital distribution). As far as console brawlers go, Foul Play definitely isn’t setting the world on fire. It’s entirely possible to make it through most of the game relying on button-mashing and simple combos. Even playing alone, it’s not unlikely to make it well into the game before “dying” for the first time.

However, that doesn’t mean the game won’t present a challenge to the player. Each stage hosts a bevy of unique challenges, whether they be earning a huge combo, defeating a group of enemies in a certain sequence or utilizing the environment in a unique way. Some of these can get pretty tough to pull off, so while you’ll rarely find the fake werewolves and faux-zombies or their monstrous overlords to be too taxing, there’s plenty to keep you on your toes as you work through the craziness of opening night.

That aspect intersects with the the stage-play in an interesting way when it comes to Foul Play’s crowd-please mechanic. Since the game is established as an elaborate performance (with an enormously long stage), keeping the audience happy is a must. Pulling off lengthy combos and taking down enemies in spectacular fashion sends the crowd into a frenzy, which earns you more “health” – such as it is. Since this is a play, there’s no need for a true health meter and, instead, you only come close to “death” when the audience turns on you, which only happens when you take too many hits from enemies (the audience, it seems, cares more about unyielding butt-kicking than a down-on-his-luck hero overcoming dramatic odds). This mechanic is also how your relative success is measured; points are doled out at the end of each level based on how happy you made the crowd.

Are there more sophisticated, complex brawlers on the market? Absolutely. As far as beat-em-ups go, this one’s fairly simplistic, but Foul Play makes up for it with its utterly unique premise and adorable aesthetic. If you’re looking for something to keep you occupied while you wait for the next big-budget holiday release, you could do much, much worse than Foul Play.

Foul Play was developed by Mediatonic and is available on Xbox 360 and PC. The game released on Sept. 18; an Xbox 360 copy was provided for review purposes.