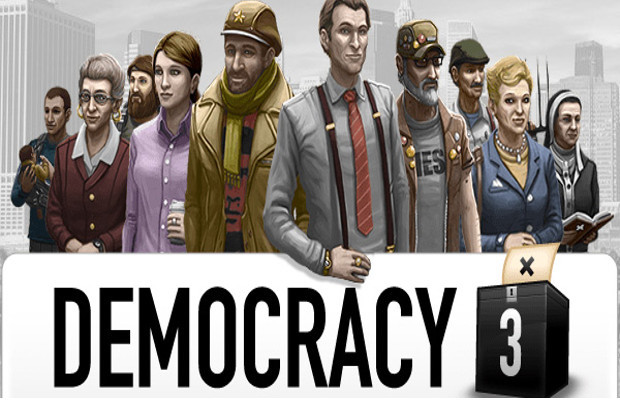 Cliff Harris knows strategy. From his uniquely engaging Gratuitous Space Battles and Gratuitous Tank Battles to the impressively complex Kudos, the one-man army of Positech Games understands what makes a unique and fun strategy game. At long last, Positech is on the verge of releasing Democracy 3, the next installment in the ludicrously deep political simulation series. I had a chance to play a good chunk of the game, which is currently in beta. The game is, as expected, another impressive achievement.

The Democracy series is intensely cerebral, and Democracy 3 is no different. This is not a strategy game to be played casually, nor is it something you can multitask with. For that reason, Democracy 3 isn’t for everyone, but the high degree of realism and strategic intensity make it extremely satisfying and rewarding.

Democracy 3 follows the same basic structure of its predecessor, but has been improved in every conceivable way. I tried going back to the prequel after spending a great deal of time in the third game, and it was difficult to adjust to an interface that feels archaic in comparison to Democracy 3’s crisp, attractive look and feel. The GUI is still basically the same: a central grid of voter bodies has a series of variables and values branching out, with the central focus of the game on the interplay between these values. This time, though, it all looks superbly clean and easy to work with.

White icons are policies, blue icons are statistics representing the state of your country, red represent bad situations, and green are good situations. Hovering over any of these will fade out the rest of the interface while everything associated with your selected icon stays highlighted with colored arrows moving between. Green means the value is increasing, and red means it’s decreasing. The Gated Communities Policy may have a series of red arrows going toward the Violent Crime situation, which means a given policy is reducing the severity of the situation. The idea behind this interface is to, as Positech puts it, “Drill down” through the policies and effects.

The real challenge and beauty of the game is that there will never be simply one cause or effect. In fact, each piece of the game—every working part—has at least three or more other pieces causing it or stemming from it. For example, unemployment, lenient alcohol laws and low alcohol taxes will increase alcohol consumption, which may in turn have effects on crime and health. Those two elements will then affect other elements. Finding the right balance and knowing when and how to implement changes is a big part of the game. For right now, there are some policies and effects that seem either too powerful or not powerful enough, but frequent updates and patches are consistently balancing some of the policies and effects, with occasional feedback from the community going into these decisions.

The most difficult (and arguably, tantalizing) element of this series is the fact that you will never appease everyone. This trend is continued in Democracy 3, to great effect. It is exceedingly rare to encounter a policy that satisfies more than one voter body without seriously angering another. You will likely never achieve universal acclaim from your country, and sometimes what’s best for the country might not be as well-received by its citizens. My brilliant (and successful) scheme to lower an alarmingly high debt lost me the reelection. Democracy 3 excels at making you ponder difficult decisions and making you learn to accept the ire of thousands of people with little or no recourse. You will upset a great deal of your populace, and the puzzle is figuring out how to get as many people as possible to like you just enough to vote for you.

This is achieved through a more accurate and intricate voter body that responds more dynamically to your actions. Sample groups of voters that have unique views on every issue feel more realistic and really increase the amount of thought, planning, and strategy that needs to be put into your session. Dynamic events and pressing decisions occurring between turns have a pivotal effect on the populace, and arguably the worst thing you can do is make snap decisions.

Modding is also possible for Democracy 3, and in a delightful twist, Harris has made it extremely easy. Without having to learn any sort of scripting language, anyone can modify the game’s text files and create new elements. With this, modding should be extremely easy as long as you know your way around basic arithmetic values by way of a graphing calculator.

Already, Democracy 3 shows a marked improvement over its predecessor. It’s more stable, looks better, and feels more relevant and current with some policies and laws that are even now gracing world headlines. This is hardcore strategy at its best. You can preorder the game right now, and get immediate access to the (VERY polished) beta, at the Positech website.