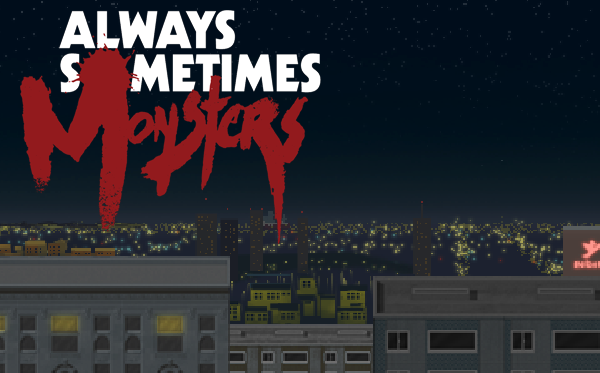 Devolver Digital are known for publishing some really neat and off-the-wall games such as Dennaton Games’ Hotline Miami and Vlambeer’s upcoming Luftrausers. They have another title from Toronto developer Vagabond Dog with their upcoming RPG Always Sometimes Monsters.

You play the role of an out of luck, out of money character who’s learned that his ex is getting married to someone else. The character can be any type of personality or person you want, as you choose their race, gender, sexuality and must overcome all obstacles that we call life. Here’s what developer Justin Amirkhani had to say about the development process:

“Developing Always Sometimes Monsters has been a continual process of evaluating not only our game mechanics, but also an evolution of how we regard ethics and morality.”

Check out their teaser trailer below:

If you’re heading up to PAX Prime this weekend, you’ll be able to check the title out in the Indie Megabooth where Vagabond Dog will be. It’ll be released on PC in Spring 2014. This might be one of the most relatable games to come out in quite some time and I’m truly excited to see the finished product, as a fan of RPGs set in modern life.