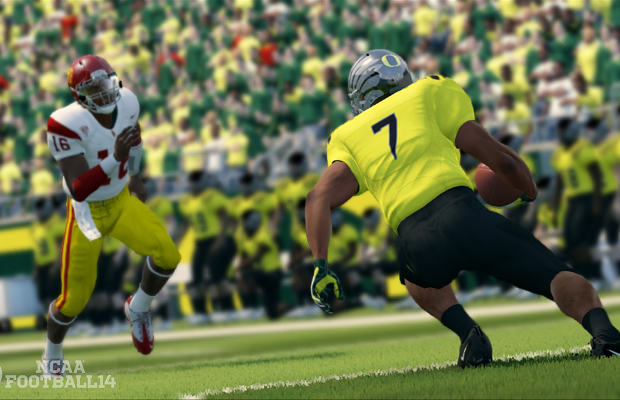 According to a recent press release from the NCAA itself, the organization will not be renewing its contract with EA Sports. No specific reason is cited, but the complete text can be found below.

The NCAA has made the decision not to enter a new contract for the license of its name and logo for the EA Sports NCAA Football video game. The current contract expires in June 2014, but our timing is based on the need to provide EA notice for future planning. As a result, the NCAA Football 2014 video game will be the last to include the NCAA’s name and logo. We are confident in our legal position regarding the use of our trademarks in video games. But given the current business climate and costs of litigation, we determined participating in this game is not in the best interests of the NCAA.

The NCAA has never licensed the use of current student-athlete names, images or likenesses to EA. The NCAA has no involvement in licenses between EA and former student-athletes. Member colleges and universities license their own trademarks and other intellectual property for the video game. They will have to independently decide whether to continue those business arrangements in the future.

It’s worth noting that EA can still licence individual teams and athletes for use in future games, but the NCAA name is off limits. Without such a deal, companies like EA and 2K cannot use the NCAA acronym anywhere in a new release. This decision could have a drastic effect on future college sports releases, as the brand carries a lot of weight.