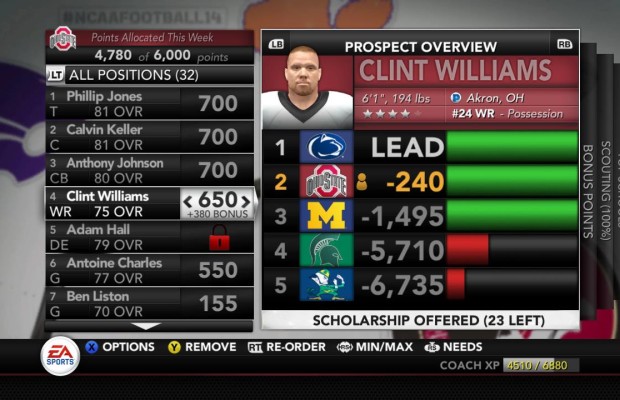 Though it doesn’t seem to receive the same praise as some of the other sports titles, it was the dynasty mode of NCAA football that truly set the stage for online dynasties or franchises. While we’ve already been given a few pieces of information on NCAA Football 14, we’ve received the very first information on the game’s dynasty mode today.

New to this year are coach skills & power recruiting. Coach skills allow to to enhance various aspects of your coaching such as recruiting or game management, while power recruiting brings a new take on a feature that seemed to take quite some time in the previous years.

Coach Skills allows budding sideline generals to build their team in whatever way they wish. Earn skill points to enhance various areas of recruiting or game management, and level up each skill multiple times in order to truly dominate both on the recruiting trail and on the field. There are over 30 Coach Skills available split across two skill trees for head coaches – Recruiting and Game Management – allowing for nearly endless combinations. Available skills include Royal Treatment, which grants a bonus whenever a prospect makes a campus visit, and Big Game, where your players will come out of the gates firing on all cylinders in rivalry games, bowl games or championship matchups. Offensive and defensive coordinators also get their own skill trees, which will help the team perform on their respective sides of the ball. Fans are free to mix and match their Coach Skills in order to build the program of their dreams.

Power Recruiting streamlines the process for scouting and wooing new players, without sacrificing any of the depth fans have come to expect. Rather than using the phone call method of recruiting, players now distribute recruiting points that will determine how stridently they pursue a given player. Point allotments carry over week-to-week, and can be quickly adjusted at any time. Need to make a big push to land a coveted recruit? Simply boost the points allotted to go all out and try to make him sit up and take notice. This, plus enhanced emphasis on campus visits and scholarships, puts a whole new spin on one of the franchise’s most engrossing features.

What do you think about the newly announced changes for the game? Be sure to let us know what you think by leaving us a comment below, or continue the discussion on Twitter or Facebook.