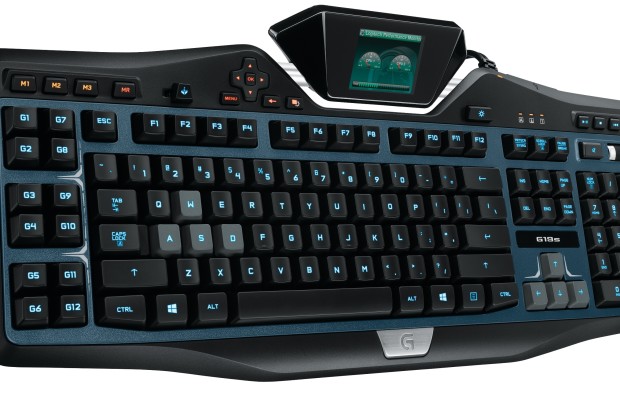 When it comes to selecting the right keyboard for your gaming setup, it can be a rather daunting task. There are a ton of different options and factors you need to consider when doing so. Do you want a normal keyboard, or perhaps a mechanical one? How much do you want to spend? You’re going to want to know the answers to these questions and more before diving headfirst into your search. But maybe you don’t want to consider these things, what if you just want to buy the best of the best, and want to know how much bang you’ll be getting for you buck. Chances are, you just might be using a Logitech mouse right now, but did you know that the developer also makes keyboards, and pretty damn good ones at that? The G19s is Logitech’s top of the line keyboard, and as such it comes with a slew of features. But are these features worth your money? That’s the question I hope to answer for you today.

This is no baby keyboard. With a color Gamepanel™ LCD display mounted on the top of the rig, this monster requires it’s own power source. The panel can display a ton of information including in-game stats, player and server data, and performance monitors. It’s a wonderful feature if the game you’re playing supports it, but chances are it doesn’t. Unfortunately, there’s a very limited list which consists of mostly hardcore games such as DOTA 2 and World of Warcraft that it does support, and that’s where this keyboard shines.

With 12 programmable macro keys, and three macros per key, you can do a hell of a lot. If you’re into MMO’s this is a wonderful feature, but for gamers, such as the likes of myself that play mostly first person shooters, adventure games, and MOBAs, it’s something that you can live without. Just like the Gamepanel™, there are some games that come with built in macros, but again, it’s severely limited.

Once you get past that, the G19s has a ton of features that every gamer can appreciate, the backlit keyboard is always great, two hi-speed USB ports are built into the side, and six-key anti-ghosting is great for when you need to hammer out moves in rapid succession. It also comes with a game/desktop mode switch that disables the Windows/Content Menu keys to eliminate window minimizations, which is probably one of the most overlooked features.

If you’re one of the many that likes to listen to music while you game, this keyboard can make your life so much easier. With dedicated media control buttons, including a mute button and volume scroll wheel, you can easily control the beats that play while eliminating the time between doing so and getting back into the fray.

Considering I do the majority of gaming on my laptop, getting a dedicated keyboard was an eye opening experience. The G19s can really make some improvements that every gamer can appreciate. The biggest issue is actually the GamePanel display as it raises the price over the cheaper G510s by a whopping $80. Considering how few games the display supports, I can’t really recommend the G19s unless you know that it is compatible with the games you own. Sure it’s nice to be able to monitor the performance of my CPUs, but if that’s something I really need to do, it only slows the computer down even more. The rest of us really don’t get what we’re paying for out of the G19s at $199.99. If this is the case, you might be better pocketing that $80 and grabbing yourself the G510s.

Logitech makes no compromises with the G19s, and that may be its greatest weak point. This keyboard is for the hardest of the hardcore and no one else. Unless you’ve got deep enough pockets or know you’re going to utilize every single feature, including the display, you might just want to step it down a notch.