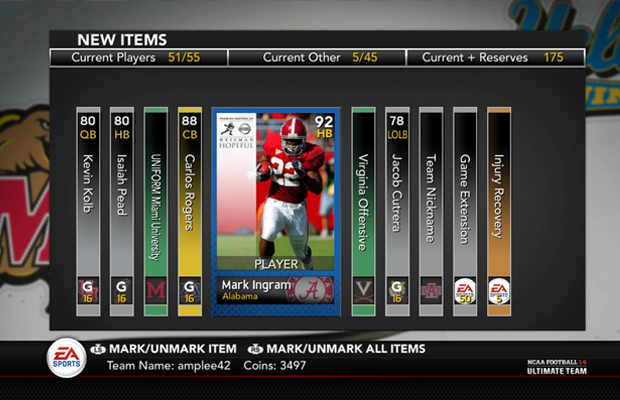 For the NCAA Football series, it has often been thought that an Ultimate Team mode couldn’t happen. EA SPORTS took a creative approach and found a way to make it work in NCAA Football 14, and we have the first details on the mode.

An appearance on the Press Row podcast by Ben Haumiller, NCAA Football 14 producer, has given us our first look at the brand new mode. Ultimate Team in the game will take advantage of the NFLPA license and bring forth active NFL players represented in their college days. Peyton Manning at Tennessee is an example of players that we’ll be able to collect and add to our team, but Ben stated that there were additional players licensed outside of the NFLPA budget.

Below, we’ve included a few snippets of information from the podcast:

There’s tons of great information in the podcast, and it appears that the Ultimate Team mode in NCAA Football 14 will be incredibly appealing. What’s your opinion on the addition of the mode to the game? Be sure to let us know what you think by leaving us a comment below, or discuss NCAA Football 14 in our community.