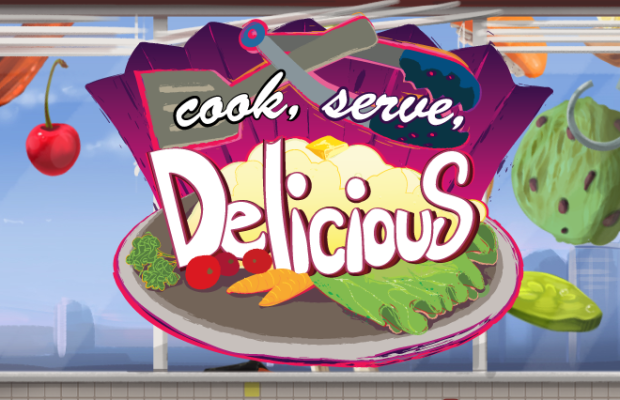 Genre blending is a risky maneuver in gaming. Adding a second style is one thing, and adding a second set of mechanics is an entirely different matter. Few games achieve a perfect balance of two different types of games, and fewer still get the feel quite right. Cook, Serve, Delicious! Extra Crispy Edition doesn’t quite nail that feel, but it comes close enough that it’s certainly worth a purchase for a frantic and honestly delectable attraction.

Think of Cook, Serve, Delicious! as a collection of micro-games wrapped inside a lite restaurant simulator. During the restaurant’s opening, you have to quickly prepare the orders that come through (up to 4 at a time for starters, and more as the restaurant gets upgraded) and do so in enough time so that the customer does not get impatient and leave. In the evening, it’s time to check emails, follow up on score bonuses, and adjust the menu. Completing checklists upgrades the restaurant’s star level, bringing new challenges, foods, and equipment. The newest version of the game, the Extra Crispy Edition, adds a number of new dishes including lobster, Bananas Foster, and the insidiously challenging shish kebab. New foods, equipment and bonuses can be purchased in between business days.

The genius at the heart of Cook, Serve, Delicious! is the fact that each of the food items requires a different method of preparation. It’s far more complicated than simply tossing ingredients on top of a burger. It starts with that, yes—but it progresses into layering lasagna correctly and getting as intense as putting the right ingredients into a soup (including chopping them up) before cooking the soup for the correct amount of time. Vertigo Gaming, in a stroke of cleverness, assigned all of these to a key on the keyboard, so that instead of clicking on icons you merely have to press the correct key.

For example, when cooking fish, you press Left, Right, and Down arrows to fillet the head, tail, and body respectively, then hit S to season and Enter to cook. You let the fish cook for a moment in its order slot, then press the corresponding order number to send it out once it’s done. Each order has different keys and operations set up for it, which requires almost constant task switching and reminders of what to do next. Some of these are deviously similar: Sopapillas and Fries have the exact same operations, until it comes to seasoning, for which each requires a separate key. Getting too overzealous and speedy without paying attention is a recipe for disaster. However, it is insanely satisfying to internalize the processes for each food and falling into a groove of rapidly pouring drinks, cooking, cleaning, and so on.

The system isn’t without problems; if you miss a key, you can’t toss it and start the order over. For example, I would move too fast and accidentally pour Cola when the customer ordered Tea. I couldn’t simply start a new glass, I had to just finish the wrong order and break my 30+ perfect streak. The game also got stuck in a couple of menus, requiring a hard reset of the game. The difficulty of the game may also ramp up just a bit too quickly for some players; at times, this is an extremely challenging game that rarely, if ever, slows down. At the same time, achieving that Zen-level of concentration and rhythm is a wonderful feeling.

The game is far more than just preparing food. The aforementioned management elements involve juggling the restaurant’s Buzz, which is a percentage modifier to the business that comes in positive and negative flavors. Every food will have things that contribute to Buzz: keeping foods on the Active Menu for too many days in a row will cause patrons to become bored. Serving too many fried foods is too unhealthy. On the other hand, some people like the more expensive dishes, which causes positive Buzz. Examining the Buzz sheet and swapping out foods to find the right combination of modifiers is a fun little puzzle. A wrench in the proceedings is Buzz that fluctuates: certain-smelling foods cause bad Buzz in the morning, but good Buzz in the evening. Most people love the easy-to-make “munchie” foods, but won’t buy them during Rush Hour, a lucrative twice-a-day period in which business is heavy and easy foods are much more preferable. In between food orders, chores might crop up such as washing dishes or throwing out the trash. It’s important that these are done quickly, since neglecting them is one of the quickest ways to kill Buzz (particularly if the Health Inspector is around).  All of them take just a bit longer, however, so it’s important to tackle them at just the right moment between food orders.

It would have been nice to see a bit more on the management side of things. Accounting for Buzz is fun, but that’s about all there is. It would have been better to be able to manage more things such as food prices, ingredient purchases, and other things that make bottom-line micromanagement such a joy in these simulation games.

It’s still a lot of fun. This is a game that is always exciting no matter what the task at hand is, and is great for a brief pulse-quickening session of digital food preparation (as well as some of the most realistic and mouth-watering sound effects in gaming). There is a nice balance between the fast-paced food serving and the mellower management elements, but the latter doesn’t go quite far enough to make this a truly satisfying sim. Luckily, the other half is just so great it makes the game more than worth playing.

Cook, Serve, Delicious! Extra Crispy Edition was developed and published by Vertigo Gaming. A PC copy of the game was provided by the publisher for review purposes.