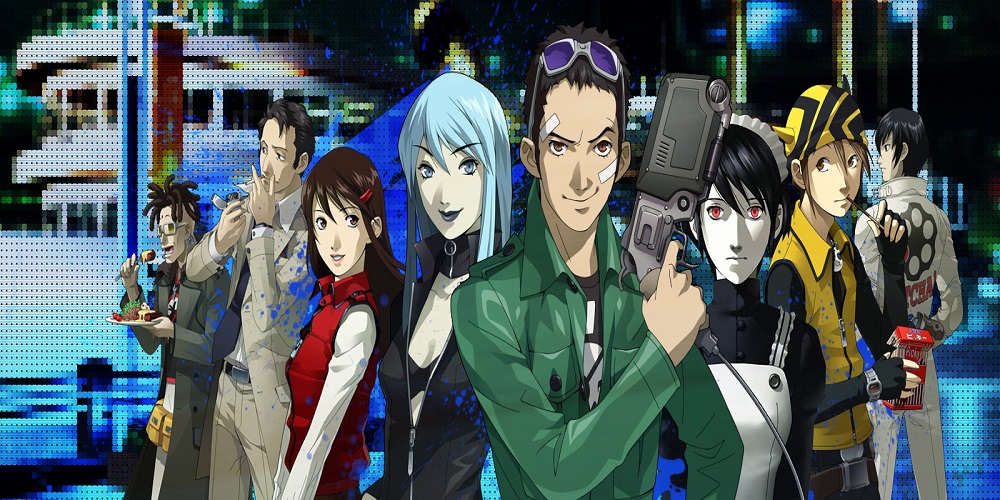 Shin Megami Tensei: Devl Summoner: Soul Hackers for the Nintendo 3DS is a remake of a 1997 Saturn game of the same name (though only released in Japan). Newcomers to the MegaTen series will approach Soul Hackers with cautious hopefulness, having heard so many great things about the series and its developer, Atlus, but wondering if a 1997 game still holds up to today’s standards. What they will find in Soul Hackers is a JRPG like many others, but one that offers quite likeable (and fully voice-acted) characters, a wide array of demons (think Pokemon), and gameplay that walks a thin line between fun and tedious.

In Soul Hackers, the player stars as the protagonist of the story and a new member of the hacker group, “The Spookies.” The game is primarily set in the somewhat bustling Amani City, as well as a virtual city known as Paradigm X. That’s not to mention the vision quests a wolf sends you on that invoke the spirit of Native American culture or the fact that there are demons in this game. Needless to say, Soul Hackers is a cyperpunk, sci-fi, supernatural trip of a game.

Being a remake of the Saturn version released in 1997, Soul Hackers has a few new features. First of all, there are 30 new demons available, though some are slightly tweaked versions of ones that were in the original. The 3DS version also makes use of StreetPass, enabling the player to convert Play Coins into an in-game currency that can be used to purchase new demons from Nemechi, a brand new feature within the playter’s GUMP. The player can also choose to evolve Nemechi by, you guessed it, spending Play Coins. On top of that, there are a few technical improvements such as faster load times and full voice acting for all of the characters.

The characters in Soul Hackers are actually quite likeable and that is primarily due to the great voice acting that does not falter among any of the characters in particular. The player will spend most of their time with Hitomi, one of the fellow Spookies, but early on in the game Hitomi becomes possessed by a demon, Nemissa, that has the exact polar opposite personality of Hitomi. While Nemissa may not care what anyone thinks or does, so long as she gets what she wants, Hitomi is a shy, but stereotypically “nice girl.” This is a JRPG, after all. In fact, Nemissa turns out to be what saves Hitomi from being just another nice girl that wants everyone to love everyone else, and wrapping it in a narrative element such as demonic possession only plays further into the meticulous layering Atlus has managed to do in Soul Hackers.

In between demon battles and traveling on a map from one key location to the next, the player will traverse different areas from a first-person viewpoint. The visuals during all of these moments appear somewhat dated and not much different from their Saturn counterpart. This is somewhat of a letdown, considering the 3DS has the capability to display more than 2D sprites on static backgrounds in between 3D first person dungeon crawling and token, miniature cutscenes. However, to those looking for more of a throwback-style of visual and gameplay design will be delighted when they boot up Soul Hackers.

The combat in Soul Hackers is in the form of turn-based menu navigation. The player will select actions for up to six party members on the field from typical options like “FIGHT,” “ITEM,” and “ESCAPE,” or let the AI do the work by selecting “GO.” Not so typical to the mix is the option to talk to the demons the player encounters. The conversation system in Soul Hackers allows the player to sometimes escape from a fight, but the real goal when choosing to talk to an enemy demon is to befriend them, so that they may join your party. It should be kept in mind, however, that demons have a level of loyalty to the player and if not improved, the demon may disobey.

In one instance, I had a demon say, “I love to listen to humans scream,” followed by inquiry into how I would scream. Upon choosing the option where I “Neighed like a horse,” the demon proceeded to tell me how “embarrassing” I was and then promptly left the fight without saying a word more. This coupled with the fact that some demons adhere to a lunar cycle and that all demons have personalities and affiliations adds a lot for the player to master.

All in all, being that the combat is turn-based on a handheld console, it complements the pick-up-and-play mentality of many handheld owners and offers just enough in terms of options and difficulty to keep the player on their toes, instead of repeatedly pressing the A button while watching their favorite TV show.

The difficulty in Soul Hackers won’t throw veteran JRPG players for a loop, but that isn’t to say that every fight is a cakewalk. Using the correct items, party members, and combat strategy is always key and, most importantly, if you do end up getting beat to a pulp, it’s straight back to the start screen and  time to load up  your most recent save. Save points are usually pretty frequent, but there were moments where I had spent a good chunk of time in a dungeon only to run out of healing items or MP for my party member in charge of healing and die before I could find my way out. It only served as a small nuisance, but those who are not accustomed to the unforgiving nature might be taken back by their first death.

Soul Hackers may be a remake that has a few dated features in today’s world of videogames, but it would be hard to imagine anyone resenting the game for those minor issues. It is still a fun game that offers a full-featured (and voice acted) JRPG experience and only stumbles slightly over its adherence to a late 90s design aesthetic.

Shin Megami Tensei: Devil Summoner: Soul Hackers was developed and published by Atlus . A 3DS copy was provided by the publisher for reviewing purposes.