The Awesomenauts cast has expanded greatly since launch with new characters being released on a pretty consistent basis. The one area that has been lacking is the amount of levels in the game. Since it only launched with three different locales, many have been begging for another map to wage war on. It was during PAX East that Ronimo Games decided to show off a brand new map, Aiguillon, and make it publicly playable on the show floor.

I swung by the quaint booth and joined in on a match in progress as my team tried to make strides towards the enemy base. Playing as the basic Lonestar, doing my appropriate job by keeping and pushing lanes. But in Aiguillon, that’s a little harder than it sounds. The map has four separate hiding spots including one directly below the main lane. These were very volatile spots when it came to fights, ganks, and surprise attacks.

Unfortunately for me, the map really does favor stealth awesomenauts and those with lots of mobility. Bursting other champions down is critically important here, especially with the new stealth power up. When picked up by a champion, they basically gain Leon’s stealth ability, giving them enough time to traverse the map before going visible again. It certainly has the potential to be overpowered, but doesn’t everything in Awesomenauts?

If you’re a fan of the game, you don’t have much longer to wait as Aiguillon was originally scheduled to release two weeks after PAX East on Steam, which would be right around now. Stay tuned as we’re sure to hear an announcement any day now. 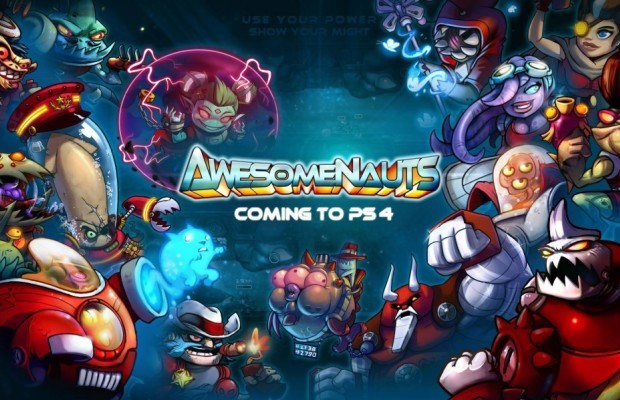