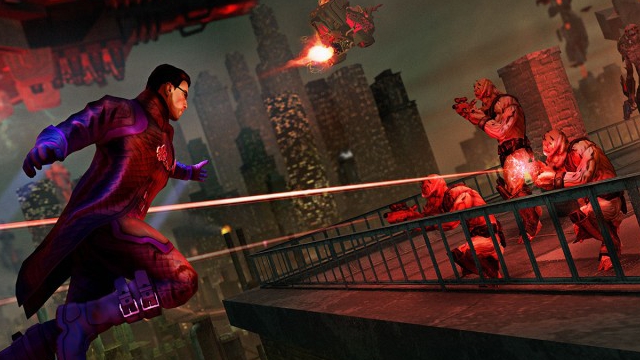 The fourth entry in the most ridiculous action series this generation sees the Saints heading up the entire free world. When all of a sudden, an alien force known as the Zin invades the Earth. Now, these aren’t your typical run-of-the-mill “All humans must die!” aliens. What the Zin do is indoctrinate you into their culture, and recruit you as one of their own. The way they do this is by trapping each person in their own personalized version of hell, and torment them until that person succumbs to the indoctrination. It’s a great take on the alien-invaders trope, and I fully expect the Zin to be greatly fleshed out in the main campaign.

Because this is Saints Row, crazy and wacky weapons are the norm, and this hasn’t changed with part IV. In the demo I was shown, two new weapons were shown off. The Inflate-O-Ray is the product of a lifetime of watching Looney Tunes. The gun fires a ray at the intended victim’s head, making it expand until they burst. The other weapon shown off was a Dub-Step Gun. What this unholy monstrosity does is fire a wave of pure wub-wub that makes a crowd of enemies dance until they die. And did I mention you get a fully armed mech? Because you get a mech, and it’s fully armed with machine guns and rockets.

In addition to a healthy selection of new and insane weaponry, Saints Row IV will allow you to not only customize weapon stats, but weapon skins as well. In one example shown, you can make your stock bazooka look like a guitar case, or a Super Scope 6. We were told that only the look of weapons will change. Civilians won’t wonder why you’re pointing a guitar case at them; they’ll instincively know that what you have in your hands is a bazooka.

But new weapons and a new enemy force isn’t everything. As you’ve probably seen, Saints Row IV allows your character to have super powers. The powers we were showed included super speed, super jump, flight, an ice blast, and telekinesis. Naturally, with each super power, there’s a new ridiculous takedown animation. To offset these new powers, the Zin have their own heroes. In the demo, a boss battle with a hulk-like Warden was teased. More than likely, you’ll have to defeat one of these bad boys to free your homies.

While all of this seems fine and dandy to existing Saints Row fans, I doubt this will be anyone’s first Saints Row game. What I’m getting at, is that I don’t think there are enough mechanics or gimmicks to be as groundbreaking as Saints Row 2 or 3. I’m sure fans of the series will get a kick out of the game, but for those like me who aren’t dying for a new game — I don’t think this will be for us.