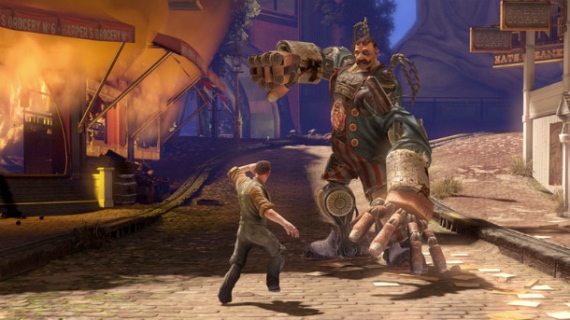 With its official release less than 24 hours away, it’s not crazy to say Irrational Games’ and 2K Games’ BioShock Infinite is one of the most anticipated games of the year (and likely one of the last heavy-hitters we’ll see in this waning console generation). If your excitement for the game isn’t at a fever pitch already, Irrational’s released a launch trailer for the game to get you going:

BioShock Infinite, rated M (for Mature), hits Tuesday for Xbox 360, PlayStation 3 and PC. The first-person shooter puts players into the shoes of Booker DeWitt, sent to the floating air-city-slash-floating-battleship of Columbia to rescue a young woman named Elizabeth from her captors. As the two attempt to make their escape, the city’s two warring factions pursue, which drives the game’s action.

BioShock Infinite is the third game in the BioShock series and the second to be developed by the team that created the original (BioShock 2 was was developed by different divisions of 2K instead of the original Irrational team headed by Ken Levine). The original game, much-lauded as an “intellectual’s FPS,” wove heavy ruminations on Randian objectivist philosophy and player agency into the narrative, while BioShock 2 pitted objectivism against collectivism; Infinite considers American exceptionalism and religious extremism.

Are you excited for Infinite to drop this week? Why or why not? Does this launch trailer get you more pumped? Let us know in the comments below.