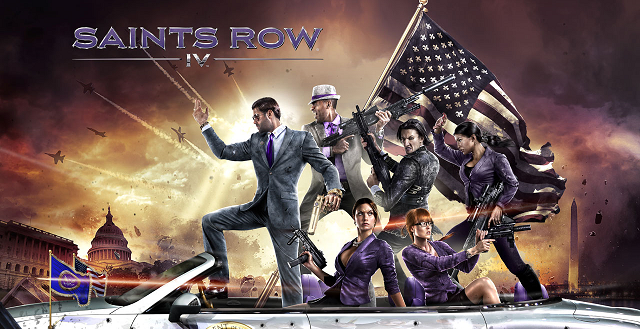 The first two Saints Row games were essentially GTA clones. They had select moments that were unique, but were filled with far too many redundant gameplay choices. But, with Saints Row: The Third, Volition took the open-world style of GTA and ran in the completely opposite direction.

The Third celebrates the game-ness of the genre, ratcheting every aspect upwards beyond the expected norm. Playing it is like going on vacation with your id at the wheel; it’s loads of fun with a good amount of weird sprinkled throughout. So now that we have confirmation of Saints Row IV, the obvious question is, “should we be excited?” My answer is a resounding “hell yes.”

Coming off of Saints Row 2, Volition needed to separate itself from the pack. They couldn’t just make another realistic open-world game, as Rockstar had proven itself the master of that style. Early versions of The Third had players infiltrating The Saints as an undercover cop, with much more of an emphasis on parkour, cover combat, and choice. But this was scrapped after a year because it just wasn’t Saints Row, it wasn’t its own thing.

Years of development helped Volition whittle down what made a Saints Row game. As development progressed, the team wasn’t afraid to scrap content, as they’ve admitted to cutting, “4,000 mand-days of scheduled work throughout the project.” Everything boiled down to one mantra, “Embrace the Crazy; Fun Trumps All.” It was through this process that Volition succeeded in making something wholly unique.

They made a roller-coaster ride that doesn’t pretend to be anything beyond just that, an amazing ride. And the writers didn’t use this as an excuse to slack off; they used it as justification to do whatever the hell they wanted. With Saints Row: The Third, they gave us an experience with a singular sense of humor, one that always comes at you swinging with well timed, witty dialogue.

You don’t just run through buildings shooting every enemy in sight, as story missions are filled to the brim with banter between you and your fellow Saints. Most importantly, whether you’re diving into a virtual world or fighting off roving gangs of luchadores, the cast of miscreants treat it all as business as usual.

I mean this with no irony: Saints Row: The Third is one of the most immersive games I’ve played in years. Above all else, its sense of humor glues all the pieces together, making every little chunk meld in a beautiful chaotic mess. I mean shit, the game has a button designated solely to nutshots. I don’t care how many pieces of classical literature you’ve read, or how many Ingmar Bergman films you’ve seen – that’s amazing.

The only footage of Saints Row IV we have is the debut trailer, and it looks like a perfectly natural progression. Volition is taking the absurdity one level higher, casting the leader of the Saints as the President of the United States. Oh, and he just so happens to have his hands full with an alien invasion. As far as I’m concerned, that makes perfect sense in the world I explored in The Third.

After the months of disconcerting talk surrounding THQ’s bankruptcy, the future of the Saints Row franchise was anyone’s guess. But, considering the vibe of the trailer, Deep Silver knew they needed to let Volition be Volition. It’s extremely rare for games to be legitimately funny, and even more rare for developers to have this kind of freedom when piles of cash are involved. Volition finally found its comedic identity with Saints Row: The Third, and having that be the final chapter for the violet clad gangsters would have been a shame. So if the same team is making another attempt, you’re damn right you should be excited.