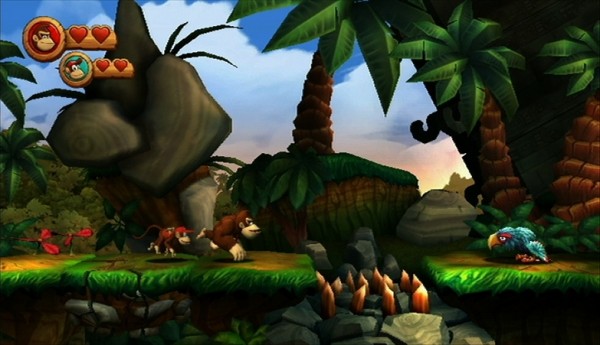 Today’s Nintendo Direct took a look at some upcoming Wii U and 3DS games and some of the 3DS games look really hot so far. But one that came out of nowhere was a remake of a Wii game for the 3DS with Donkey Kong Country Returns 3D.

Not much else is known at this point other than it’s a remake and it has 3D functionality. The game was originally developed by Metroid Prime developers Retro Studios so it’s unclear if they’re working on the 3DS remake. It was one of the best platformers on the Wii and it can painfully difficult in the last few stages. But it’s a wonderful experience and a great throwback to the original Donkey Kong Country with bits of Jungle Beat thrown in.

You can check out a trailer on the 3DS e-Shop later today if you want to get a gander at the ape himself.

Are you excited to get more bananas? Let us know in the comments or post in our forums.